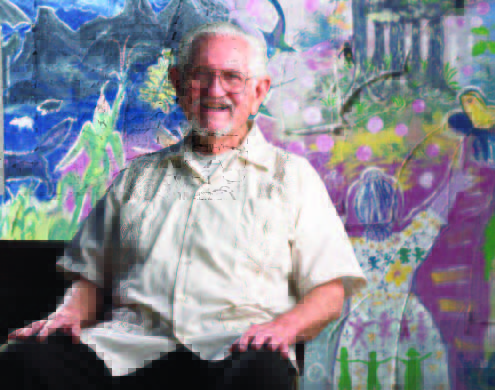 From Social Security: What’s at Stake for Children, Youth, and Grandfamilies

For his next birthday, George Arévalo has a simple plan to celebrate. “I’ll be doing what I’m supposed to be doing – taking care of the children.” With his wife Virginia, 77, George has cared for his three granddaughters, ages 6, 12, and 18, for the past three years. George and Virginia depend on Social Security benefits.

“It’s there to make sure my granddaughters can go to the doctor when they are sick, eat healthy food, and live with loving family members,” George said. “That’s all I have to live on.”

George was in his 70s when he was told his son and his daughter-in-law weren’t going to be able to continue to take care of his grandchildren. The retired barber and his wife decided they would step in.

“I thought to myself, I’m not going to give them to Child Protective Services,” he says. “I’m going to take care of them. And I did. They are happy right here in my home.”

Virginia suffered a stroke one week after the children arrived. Since then, George acts as the primary caregiver for her and the children. He transports them to appointments, school, and activities. He pushed for the children to attend Catholic school, where they receive scholarships and make good grades. He opened his house to his son when he was released from prison last year. Through the challenges, George maintains a positive outlook. “Right now, we’re doing our best,” he says.

The future is hopeful for the Arévalo family. George’s son recently bought a house two blocks away. George mortgaged his own house in order to help his son with the down payment. “I’ve never seen a guy so earnestly dedicated to improving himself,” George says. “That’s why I’m trying to help him. It’s a family thing.” But George will continue to care for his grandchildren. “The children come first,” he says.